Last night, after two years, I went back to the city to street preach.

Why did I stop? I don’t know, only that the Holy Ghost compulsion to go simply left me two years ago.

It’s not like I’ve been doing nothing in that two years, I’ve been preaching in a homeless mission on a regular basis, I have preached twice at a drug rehab centre and also a Baptist church. I’m almost now qualified as a Chaplain too, but the street preaching just stopped. I didn’t have any idea if I ever would go back to the street, but I knew that I certainly didn’t want to go back in the flesh.

The fact that I had been given an amazing PA system for free and I’d only used it once street-preaching sometimes haunted me. I had said a number of times to a fellow street-preacher that he is welcome to it, but he never came to collect it.

So why did I go back? I don’t know either. Only that over the last few months I’ve started to feel the desire to go again. Every now and then, little things, and then the fire inside would leap a little. And then I’d pray “Do you want me to go back Lord? I will go back but only if You want me to and You need to show me”.

And then I’d let it rest again.

And then my Mum said she’d take my kids last night for the night as it’s school holidays at the moment. Then I heard on the grapevine that the team was going out last night to the city. It was a perfect set of circumstances to go. And I wanted to go.

Then….I woke up yesterday morning with that familiar nervousness in the pit of my stomach, thinking why do I have to go? Why does it have to be me? All the other Christians are going out for dinner or sitting at home in their comfy PJ’s watching tv, why me? Sad huh.

If you want me to go, please confirm it Lord, because I don’t want to. I’m scared.

Then I see Pst Bill Randles Blog title “Wisdom Cries In the Streets”. I turn to Proverbs 1:20, 21:

“Wisdom cries aloud in the streets

She raises her voice in the open squares.

She cries out in the chief concourses

At the openings of the gates of the city…”

Hmmm. I remember that right now it is Sukkot and that Jesus cried out in the street at Sukkot:

“On the last day, that great day of the feast, Jesus stood and cried out saying, “if anyone thirsts, let him come to Me and drink. He who believes in Me, as the Scripture has said, out of his heart will flow rivers of living water.” John 7:37, 38 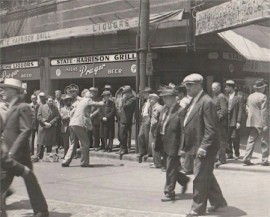 So I went. I took a darling daughter in Christ with me, for her first time, and we went. When we arrived Pst David prayed over us John 7:38.

I thought I wouldn’t preach, that I’d just hand out tracts and see how I went.

That’s what I thought.

When I got to the “gate of the city” at the steps of the great station I knew I was to preach. Seas and seas of people crossing the road toward me, coming down the steps from the trains behind me. Seas and seas of people whom perhaps had never heard the gospel, who may never hear it. So I preached. And man, it just felt like home. It felt so good, so right, so amazing.

Even when the two lesbians very deliberately came and stood right in front of me passionately kissing as I preached the gospel. Even when the father leant over on his small son’s back in mocking laughter at me. Even as people called out “My god is football!”

I was so glad to be there. Because that’s where Christ Jesus is. 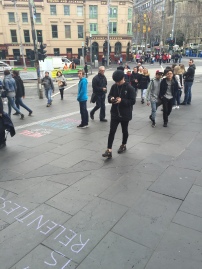 I had forgotten that “all the while He was down (by His Spirit) among the poor struggling, drowning creatures in the angry deep, with His arms around them trying to drag them out, and looking up – oh! so longingly but all in vain – to those on the rock, crying to them with His voice all hoarse from calling, “Come to Me! Come, and help Me!” [1]

9 thoughts on “Back to the Streets: Diary of a Girl Street-Preacher”

Matthew 3:11: "He shall baptize you with the Holy Ghost, and with fire."