of 2011 and when we look at what is going on in Iraq at present, we surely cannot help but be horrified by all the seemingly senseless killing going on: faction against faction, each wanting to be in absolute control. We know that religiously all the combatants essentially follow the same faith, although we know they have split into two main groups, Sunni and Shia, and mostly they also have the same ethnic heritage; the majority of Syrians referring to themselves as Arabs while Iraq’s dominant ethnic group are regarded as the Iraqi Arabs.

This is not about who is right or who is wrong in the conflicts taking place there at present, nor is it about the involvement of the US, Russia, Britain or Europe, whether directly or from behind the scenes, but it is an attempt to try to get some understanding of the root causes of the whole situation there.

As Christians we cannot help but be reminded of Ishmael and Esau from whom the Arabs are descended. At this point it will be meaningful to look at a few scriptures regarding these two “patriarch’s” of the Arab people.

“I will so increase your descendents that they will be too numerous to count”. (Gen. 16:10.)

Later in Genesis 17:20, God reaffirms this promise to Ishmael.

However, in Genesis 16:12 the angel of the Lord also announced to Hagar that her son, Ishmael,

“will be a wild donkey of a man; his hand will be against everyone and everyone’s hand against him, and he will live in hostility toward all his brothers”. (Gen 16:12.)

As for Esau, we learn that included in Isaac’s blessing to him, were the words that he was destined to “live by the sword”. (Gen 27:40.)

In both these scriptures, without being too simplistic, we seem to find a fitting and vivid description of the incessant feuding that goes on between the Arabs themselves, their neighbours and others: a situation that has been going on since those words were spoken by God and by Isaac and one which we surely are witnessing going on now in Syria and Iraq?

In time to come we will see this happen again; but on this occasion it will be a much larger conflict than any the world has witnessed to date. It will also be a conflict in which God Himself gets directly involved on Israel’s behalf. At that time God will intervene and through His intervention he will magnify His Name. As a result both Israel and the nations will know that He is the Lord; that it was He who defeated Israel’s enemies.

Here we refer to the war described by Ezekiel in chapters 38 and 39 of his book, when he tells of a vast army led by Gog of Magog which comes against Israel: most commentators interpret this army as being a coalition of Arabic nations led by Russia.

God uses a number of supernatural events to all but wipe out this vast army. However, one interesting method God uses is found in Ezekiel 38:21 where He says: “I will summon a sword against Gog on all my mountains, declares the Sovereign Lord. Every man’s sword will be against his brother.” Not only will God use a number of supernatural means to defeat the coalition led by Gog, but the coalition of Israel’s enemies will turn on itself!

It will surely be a repeat of what we are witnessing now and what has been foretold in God’s Word and, in view of what we see going on at present as well as noting who the parties are that are now involved, dare we ask whether we are even now seeing the build up to this terrible war?

(Note: All quotes are from the NIV Bible.)

Interesting times we live in.  As I was watching the news this afternoon the absurdity of the following scenario struck me….

As a large weapons cache is discovered on board a ship headed for Gaza, in the Red Sea, allegedly sent by Iran in order to arm Gaza militants, Catherine Ashton, the EU foreign policy chief and former vice-chair of the Campaign for Nuclear Disarmament (CND), as well as other leaders, shake hands and smile with Iranian leaders in Tehran.  She was there to hold talks with President Hassan Rouhani and Foreign Minister Mohammad Javad Zarif about their nuclear program. 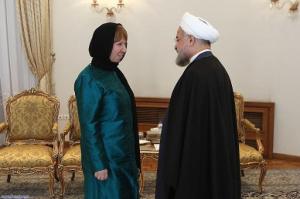 The international community has so far been rather quiet on the subject of this weapons cache….Food for thought.

“Indeed, He who watches over Israel will neither slumber nor sleep.” Psalm 121:4

In view of current events in Syria, two prophecies are worth considering. (There are other scriptures of interest concerning these cities, but will not be referred to in this short post.)

The two scriptures are:

“Hamath and Arpad’ are dismayed, for they have heard bad news. They are disheartened, troubled like the restless sea.  Damascus has become feeble, she has turned to flee and panic has gripped her; anguish and pain have seized her, pain like that of a woman in labor.  25Why has the city of renown not been abandoned, the town in which I delight?  26Surely, her young men ° will fall in the streets; all her soldiers will be silenced in that day,” declares the lord Almighty

27“I will set fire to the walls of Damascus; it will consume the fortresses of Ben-Hadad”

“See, Damascus will no longer be a city but will become a heap of ruins. . . “

Jeremiah’s prophecy is found in an end section of his book where God tells him of the judgments to come against the Nations, as well as some cities specifically mentioned. Right now Hamath and Damascus are the focus of our interest.

Isaiah’s prophecy is found early on in the book. It too occurs in the section dealing with judgment against the Nations and, in this case, where Damascus is specifically mentioned.

It is not our intention here to go into God’s reasons for His judgment against the Nations or cities, but to consider these scriptures in the light of current events. We certainly do not want to make light of these judgments or to “look forward” to their fulfilment. They are severe and final when they take place but, for us, they are important points on the prophetic path God’s has laid out.

(As a word of caution, when considering God reasons for judgment, be careful not to take a current world view which is that if these Nations, or cities, simply followed a democratic process all would be in order. God does not look at democracy. He looks at the actions of mankind in relation to His commandments. Keep in mind that democracy is a flawed man-made system. It has been said, by Churchill amongst others, that democracy is a bad system but it is the best we have.)

Damascus is the oldest continuously inhabited city in the world and, unlike other cities in the region, including even Jerusalem, it has never been destroyed. In other words, the prophecy in Isaiah has never been fulfilled. Damascus is only a short distance to the north of Israel and is the capital of present-day Syria.

Damascus was part of David’s and Solomon’s kingdom. It was also the city where Paul was headed specifically to persecute Christians. On his way there he was confronted by Jesus and lost his sight. It was in Damascus that Jesus told Ananias to go and lay hands on Paul because Paul was His “chosen instrument” to take the Word to the Gentiles, their kings and the people of Israel. In the house in Straight Street, where Paul was staying, Ananias laid hands on him whereupon his sight was restored and he was filled with the Holy Spirit. (Acts 9: 1-19) NIV.

Straight Street is still there to this day!

So clearly Damascus is a city with an important past, yet God says He will destroy it and it will become “a heap of ruins”.

Hama, which lies some 50 kilometres directly north of Homs, is almost certainly the Biblical city of Hamath, within provincial Hamath. Homs is about 150 kilometres north of Damascus. While Damascus came under David’s and Solomon’s kingdoms, these other two cities did not, although they were both under Solomon’s control. Since at least 1925 Hama has been the source of a number of uprisings, mainly from Islamic fundamentalists.

Currently Syria is in the throes of a violent civil war; the roots of which run deep and which are extremely complicated. We have seen images of the devastation taking place within the country, especially in Homs, Hama and to some extent in Damascus itself. We have heard about the huge numbers killed, well over a hundred thousand now, the two million or more who have fled the country and are living in tents in the desert, often without enough food and other problems. It is a situation so bad that the average person not directly involved is unable to fully comprehend it.

We know that both the Syrian and opposition forces are well armed and have the means to turn Damascus into a “heap of ruins”. Could one or other of these adversaries in a final act of desperation resort to such tactics? And what if Israel is brought into the conflict and needs to defend itself? These are merely possibilities leading to the destruction of Damascus. Certainly there is a lot of pain and suffering going on right now throughout Syria as well as in Damascus, Homs and Hama. 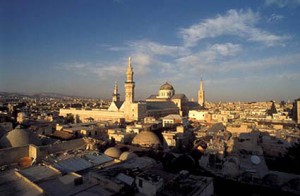 The question we pose is this: “Is it possible that we are witnessing an aspect of God’s prophetic Word about to be fulfilled”?

We do not say it is – although we do urge readers to be aware of Bible prophecy and current events in the Middle East and, above all, to keep their focus on Jesus. 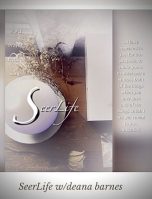