Hanakkuh is an 8 day Jewish holiday, beginning on the 25th day of Kislev, celebrating the re-dedication of the Temple in Jerusalem by the Maccabees in about BC 164.

Hanukkah has now become a special time for us because on Wednesday, the first night of the feast, both our daughter and our son were baptized in our bathtub by their Dad.

We had friends and family over for a meal last night whom witnessed our children’s public declaration of their faith in Jesus Christ.  At the same time we asked their Poppy to dedicate them to the Lord, since this is a Feast of Dedication.

The interesting thing is that until yesterday I didn’t know that Jesus actually attended this very feast Himself in Jerusalem. 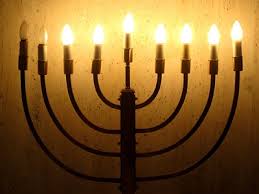 “Now it was the Feast of Dedication in Jerusalem, and it was winter.  And Jesus walked in the temple, in Solomon’s porch.”  John 10:22, 23

Because all of the Feasts point to Christ, and by the fact that Jesus attended this Feast Himself, I think we could say that Jesus attached some significance to it, and so it is worthy of our consideration.

During the period of the Syrian rule over Palestine the Jews suffered extreme persecution.  Under Antiochus Epiphanes many Jewish men, women and children were slaughtered mercilessly.  He also desecrated the Temple of the Lord by removing the golden altar, candlestick and vessels and setting up a statue of his false god Jupiter in the Holiest of All.  The Jews were commanded to worship this idol and only (un-kosher) pigs were allowed to be sacrificed in the Temple.  The Jews were forbidden from keeping the Sabbath and from practicing circumcision.

Eventually a godly remnant of Jews revolted against this oppression and the desecration of the Temple.  The Maccabees family led the revolt which eventually drove the Syrians from Jerusalem.  Judas Maccabees then cleansed the Temple and re-dedicated it to the Lord.  During this time the Temple was illuminated with a consecrated oil which miraculously lasted for eight days.  This is why Jews today light nine candles, one for each day of the Feast, during the “Feast of Lights”.

Eventually there arose from the revolt three sects amongst the Jews – the Pharisees, the Sadducees and the Essenes.

Pastor Bill Randles writes this about the Pharisees in his article “Why Saul Hated Christians”:

“Pharisees were not rationalistic unbelievers as the Sadducees were, nor were they political schemers as the Herodians of Jesus day. Pharisaism was a serious attempt to systematically observe the laws of God, and to separate from ungodliness. However, of all of the known sects of Israel in Judea at the time of Christ, Pharisaism was closest to the theology of Jesus.”

The Pharisees were the religious leaders during the time that Jesus walked the earth.  They observed the Feast of Dedication as a way of commemorating the Maccabees cleansing and re-dedication of the Temple at a time when the Jews were set free from massive persecution.  They lit candles in honour of the miracle of the light shining for eight days.

Yet  when Jesus, the fulfillment of the feast, was walking right among them –  they didn’t recognize Him.

While they were lighting the candles in the temple, He who is the Light of the World was walking amongst them in the temple.

While they were commemorating the cleansing of the temple all those years ago, He, who had cleansed the Temple twice in front of them, was there.

While they were celebrating the emancipation from their persecution, they were persecuting the Son of God Himself.

Why?  Because they couldn’t see Him.  For all of their knowledge of the Torah, their good works and their religion, they didn’t recognize their Messiah even when He was right in front of them.  Whilst they were celebrating a feast that pointed to Christ, He was there in their midst and they missed Him.

“The Jews who were there gathered around him, saying, “How long will you keep us in suspense? If you are the Messiah, tell us plainly.”

25 Jesus answered, “I did tell you, but you do not believe. The works I do in my Father’s name testify about me, 26 but you do not believe because you are not my sheep. 27 My sheep listen to my voice; I know them, and they follow me. 28 I give them eternal life, and they shall never perish; no one will snatch them out of my hand. 29 My Father, who has given them to me, is greater than all[c]; no one can snatch them out of my Father’s hand. 30 I and the Father are one.” John 10

Further to not being able to see Him, they also persecuted Him:

“ Again his Jewish opponents picked up stones to stone him, 32 but Jesus said to them, “I have shown you many good works from the Father. For which of these do you stone me?”

33 “We are not stoning you for any good work,” they replied, “but for blasphemy, because you, a mere man, claim to be God.” John 10

As Kevin Conner writes in “The Feasts of Israel:

They kept the Feast of Dedication but sought to stone the One to whom the Temple was dedicated.  Thus they missed Him at another Feast, even as they had at previous Feasts.”

They kept the letter of the law – but had not the spirit of it.

They had the ritual, but not the reality – Jesus Himself!

How easy it could be for us to now say “Tut-tut how could they have missed Him?” But….have we ever done this ourselves?

Do we have a worship of God based on ritual, on the external works of man?  Are we, ourselves, of the letter and not of the Spirit?

Do we actually have the reality of Christ Himself?

And here is a BIG question – Have we actually, amidst our profession of Christ, missed Christ Himself? Or worse still, have we persecuted Him?

As a Christian, we may well wonder whether it is actually possible to persecute Jesus.

The answer is yes.

When Saul was persecuting the Christians, Jesus appeared to him on the Damascus Road.  Notice that Jesus didn’t say “Saul, why are you persecuting my children?”,

No. He said “Saul why do you persecute Me?”

We need to be careful that we don’t persecute Him, by persecuting one of His children

We need to be careful that we don’t reject Him, by rejecting one of His children

Have we ever deliberately withdrawn our fellowship from another believer because they do not conform entirely to our own concepts and viewpoints?

Have we ever slandered other Christians?  Caused division between brothers and sisters?  Have we accused others of having a spirit other than the Holy Spirit?

And…what if we are wrong…?

We need to watch that in our quest to be right we do not miss the Saviour.  What if He were to come to us in a way we did not expect – in a meek and lowly way, in a way of weakness?

What if He were to come to us through someone outcast or poor?  Or how about a mentally- ill person?

What if it were through a Christian whom didn’t conform to our idea of ‘Christian’?

Jesus spoke a lot with the Pharisees. He warned them, spoke honestly to them, because He loved them.  He wanted them to see Him, but they wouldn’t.  If He was the Messiah then they didn’t want Him.  He wasn’t what they were looking for, He didn’t come to them as they expected – so they rejected Him.

No wonder Jesus wept over Jerusalem and said:

“Jerusalem, Jerusalem, you who kill the prophets and stone those sent to you, how often I have longed to gather your children together, as a hen gathers her chicks under her wings, and you were not willing.”  Luke 13:33-35

This brings us to a very important point:

It is possible to know the Word of God without knowing the God of the Word.

If the Pharisees had truly known God they would have recognized Jesus.  They knew the scriptures, they knew the Law, but Jesus they didn’t know.

Jesus is not separate from His Body, the Church.  So when one of His members is persecuted He takes it personally.  We need to be careful, oh so careful, that we don’t become so full of head-knowledge that we can no longer recognize Jesus nor His Body.  Because in doing so we may become like Saul, like the Pharisees, and persecute the very Lord we profess to follow.

Jesus said, “Isaiah was right when he prophesied about you hypocrites; as it is written: “‘These people honor me with their lips, but their hearts are far from me.” Mark 7:6

The letter truly kills, but the Spirit gives life.  This Feast of Dedication, let us re-dedicate our lives to Christ Himself, not to a creed, not to a denomination, nor to a set of rules or ideals, but to the Son of God Himself.  Let us live in the light of His illumination and really get to know Him personally.

Once we truly know Him, then we will recognize Him, even in the unexpected.