“The chief danger of the Church today is that it is trying to get on the same side as the world, instead of turning the world upside down. Our Master expects us to accomplish results, even if they bring opposition and conflict. Anything is better than compromise, apathy, and paralysis. God give to us an intense cry for the old-time power of the Gospel and the Holy Ghost!”  A. B. Simpson 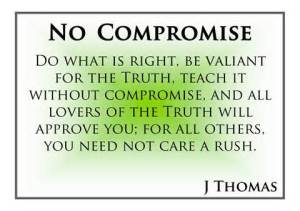 I guess he could have. It would have probably been a whole lot easier for him to accept the first offer from Pharoah which came after the plague of flies : that the children of Israel can go make their sacrifices to God right there in the land of Egypt.

But Moses said “no deal” – that’s not what God had instructed: “We will go three days’ journey in to the wilderness and sacrifice to the Lord our God as He will command us.” Exodus 8:27

After the plague of hail Pharoah conceded slightly and offered a new deal to Moses “Go now, you who are men, and serve the Lord.”
But, again, Moses said “no deal”, that’s not what God had commanded : “And Moses said, “We will go with our young and our old; with our sons and our daughters, with our flocks and our herds we will go, for we must hold a feast to the Lord.” Exodus 10:9

After swarms of locusts and 3 days of intense blackness Pharoah called Moses in. He was ready to offer his best compromise yet:
“Go, serve the Lord; only let your flocks and your herds be kept back. Let your little ones also go with you,” he said.

This was his best deal yet. After all, Egypt’s own animals had now been wiped out by boils, hail and disease. Moses only need leave the animals behind and all the men, women and children were free to go!

Did Moses yield and make a compromise with the one holding God’s people captive? Did he agree to the deal with Pharoah potentially bringing about peace and unity between the Israelites and the Egyptians?

‘But Moses said, “You must also give us sacrifices and burnt offerings, that we may sacrifice to the Lord our God. Our livestock also shall go with us; not a hoof shall be left behind. For we must take some of them to serve the Lord our God, and even we do not know with what we must serve the Lord until we arrive there.” Exodus 10:25, 26

Of course Moses didn’t make a deal with the devil, oops, I mean Pharoah. He didn’t compromise one inch! Not even one little hoof was to be left behind!

Moses was a man of God with a foundation of truth and integrity that was built on the Word of God. Moses had always told Pharoah the truth. The whole truth – even the hard parts about judgment.  Moses had always proclaimed the truth and he wasn’t going to start backing down now.

My question is…..So what on earth has happened to the Church?

At every turn we are compromising: making deals with the devil, shaking hands, signing documents with Islam (Chrislam), Interfaith conferences, performing occult practices in the Church.

“Do not be unequally yoked together with unbelievers. For what fellowship has righteousness with lawlessness? And what communion has light with darkness?” 2 Corinthians 6:14

Imagine if Moses had said “yes” to one of Pharoah’s little deals…who knows, maybe he was tired and the offer was tempting….

“For I am not ashamed of the gospel of Christ: for it is the power of God unto salvation to every one that believeth…”  Romans 1:16

Let us not fear men more than we fear God.  Where would that have gotten Moses?

“Give me one hundred men who fear nothing but sin and desire nothing but God, and I care not whether they be clergyman or laymen, they alone will shake the gates of Hell and set up the kingdom of Heaven upon the earth” John Wesley